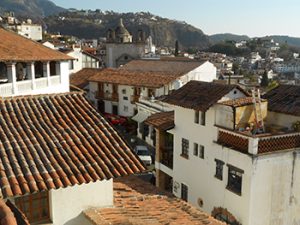 Streets and Rooftops of Taxco

Silver and so much more!

Blanketing the side of the La Bermeja mountain, Taxco is one of Mexico’s most picturesque cities. The white-washed buildings and red-tiled roofs are endless, accessed by a labyrinth of narrow, winding streets. Feeling more like Europe than Mexico, the lively energy of this rich city is infectious.

Taxco is known as the silver capital of Mexico and people come here from all over the world to buy the unique, handcrafted silver. Once a dying village, Jose de la Borda, a silver magnate discovered a new mine in the 1800’s and brought it back to life. Another important figure in the history of Taxco, William Spratling came from America in the early 1900’s, bringing a tradition of Mexican style and handicraft that turned the silver into true works of art, with a bit of magic blended in.

At an elevation of 5,800 feet, Taxco has a semi-tropical climate that is pleasant year-round. Midway between Mexico City and Acapulco, it makes a nice stop on any travel itinerary (just a three hour drive south of Mexico City and another three hours from there to Acapulco).

Taxco had intrigued me on previous visits and I wanted to see more, so when some friends came to visit from the states, I included an overnight stay on our itinerary. With only a day it didn’t give time to take in all the sites, yet we found it was enough to make it worth the stop.

We came to Taxco to see and buy silver. This is the lure of Taxco. Jewelry resellers, tourists and other travelers come here from around the world to shop. The products are good quality at a good price.

Like many tourist towns, we were bombarded with local guides from the moment we set foot in the town square. They were overly helpful, offering to show us around the shops, restaurants, hotels and attractions, with discounts to some of their favorites.

I found Taxco to be one of the most accommodating cities I’ve visited in Mexico. Everyone is here to help, and surprisingly they weren’t always looking for a tip. One young man saw me struggling to park our rental car and helped guide me into a narrow parking space. Another man took me personally from the parking garage to the elevator and back up into town, when I surely would have been lost. There is an air of genuine kindness to the tourist. 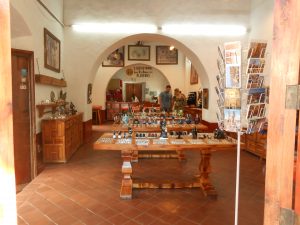 As we began our day, we weren’t interested in hiring help, we just wanted to explore. Wading through the pushy guides in the plaza, past the bustling shops, we went for the ‘gold’ (or silver in this case). Acting on a tip given by a silver buyer from the states, we were looking a hidden gem in a city of gems, a store called “Hecho A Mano” (meaning Made by Hand).We were told that it was one of the best stores in town. Each piece they make is handcrafted in the ancient way, with no machinery ever used. Their store offers some of the most unique pieces of silverwork in the city.

We met the owners, Manual and his wife. It’s common to find them working in one their two stores almost any day of the week. They graciously showed us their work. There is nothing standard in the way they blend ancient Mexican design with modern craftsmanship. They pulled out bracelets, cuffs, pins, earrings, chokers and necklaces for us to see and try on. My designs favorite were the jaguars and Aztec God Quetzalcoatl. We saw jewelry depicting various Mexican dieties, along with animals like fish, birds, monkeys and more. My friend had a design of his own, that he brought with him, and Manual helped him to customize an order for a piece that would be special just for him. 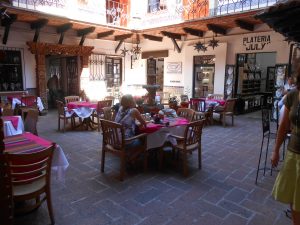 After the shopping we were feeling hungry and Taxco also has a variety of some wonderful Mexican food. We arrived on pozole day, which we learned is every Thursday. Pozole is a traditional Mexican soup made with hominy, meat, peppers and seasoning. Shop owners told us where we could find the best pozole in town, the one the locals frequent. With options of green, red or yellow pozole, there was something for every taste. 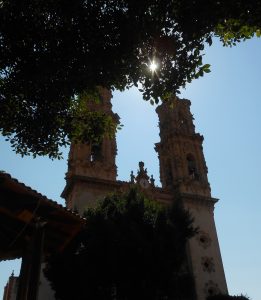 One of the most beautiful Churches in Mexico

Our day in Taxco was rounded out with a visit to the Santa Prisca Church, a central landmark of town. Located on the east side of the zocalo (or main plaza), the church was designed and paid for by Jose de la Borda, the same man that got the silver mines going again back in the 1800’s. He’s a bit of a hero in town. The richest man in town, he invested almost all of his money into the building of this church for his son, the parish priest. 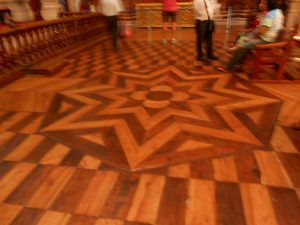 The elegant detail of the church reflects Borda’s his love for his son. Constructed of a pink stone from the area, the front of the church has decorated twin towers and a domed roof in the back. Inside are nine floor to ceiling altars, covered in gold, the hardwood floor has an inlaid star design in front of the central altar. It has a very special energy and quality to it, a quiet feeling compared to the busy town outside it’s doors.

We had started the day early, before much was happening. By the time we left the church the city had transformed. People were busy shopping, taxi’s ran continually around the plaza and through the streets, and the city was once again alive. Our trip was short and it was already time for us to be on our way, but much more of this beautiful city remains to be explored.

Visit the Teleferico, a skyride in an enclosed car that climbs steeply up 170 meters in 5 minutes from the base in Taxco to the Montetaxco Hotel. The views are incredible.

Museo Guillermo Spratling is a 3-story museum dedicated to the history and archaeology of the area. Find it off an alley behind Templo de Santa Prisca. You will find pre-Hispanic jewelry, art, pottery and sculpture from US silversmith William Spratling’s private collection.

Del Angel Inn offers excellent Mexican food with rooftop dining. They serve chicken, pork and steak with Mexican rice and beans and other sides. There is a full bar. You may be serenaded by a live Mariachi band as you eat. Views overlooking the city are best at sunset and as the lights come on at night. Celso Muñoz #4 – Altos, Col. Centro, Taxco de Alarcón, Guerrero México, Tel: (762) 622-5525 www.delangelinn.com

Stay the night at Hotel Los Arcos Taxco. This 3 star hotel offers comfortable accommodations with the local charm of the city. Built in 1572, you will find an interior courtyard, surrounded by rooms that each have their own style, and topped with a terrace and a jacaranda tree growing out of the center, blooming with purple leaves. Juan Ruiz de Alarcón #4, Col. Centro, Taxco, Guerrero, Tel: 01 (762) 622 1836 www.hotellosarcosdetaxco.com

Xochicalco is an ancient pyramid site built on an open mountain. This was an important pre-Columbian site founded in about 650 AD with ceremonial centers, pyramids and living quarters. It was the place where the Mesoamerican cultures came together to coordinate their calendar systems. There is an astronomical observatory in an underground cave which is illuminated by the direct sun’s rays for several months around the time of the summer solstice.

Xochicalco is about 1 1/2 hours north of Taxco and an hour south of Cuernavaca, making it an easy side trip if you are coming from Mexico City on your way to Taxco. Xochicalco