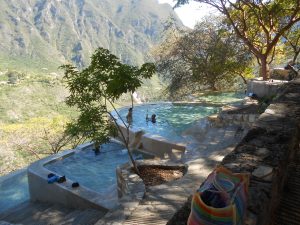 Imagine yourself soaking in pools of naturally-heated water, cascading down the steep mountainside, the water flowing from one pool to another, with breathtaking views of the canyon below. When you’ve had enough of that, go for a swim in the river below, or take the zip-line down the ravine. This desert paradise is the perfect holiday or weekend retreat for a solo traveler, romantic getaway, or family adventure.

Remote, but accessible, The Grutas de Tolantongo is a semi-tropical gem, tucked away in a canyon that drops from the high desert plains of the state of Hidalgo. Originally named Tonaltonko (meaning home where it feels warm) in the ancient Nahuatl language, the Grutas de Tolantongo (or Grottos of Tolantongo) is a hot springs haven with so many delightful ways to enjoy the water you’ll keep your swimming suit on all day. 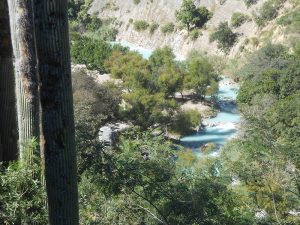 View of the River and Swimming Holes

The river cut a steep canyon with an unnaturally baby-blue water that gets it’s color from a high content of calcium and magnesium. The thermally-heated water flows out of the mountain, from two grottos at the end of a box canyon. Small streams and waterfalls along the canyon also feed into the various pools at the resort. With the invite of a friend, we planned a three-day trip and ended up staying for four.

An hour bus trip from Ixmiquilpan took us to the Grutas (only 17 km away, but feeling much longer). After crossing the high plains the road drops quickly into a ravine, through a series of switchbacks, to drop us off at the main hotel (there are 4 on the property).

We climbed out of the bus with heavy suitcases, filled with what we thought we’d need for three days of camping, only to find that we had to haul them down a long stairway to the beach area along the river below. Arriving on the last bus, around 6:00 pm on a weekday, most of the services were already closed and there were no porters to carry our bags. We had to haul them down the steps ourselves.

It seems that stairs and steps are the theme here. Built into the canyon wall, everywhere you go there are steps either up or down. It’s not the kind of place for the handicapped, elderly or anyone out of shape (unless you’re looking for a workout). But being one of those out-of-shape people, I found this place is definitely worth the effort! 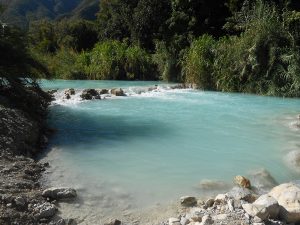 The river invites you in for a swim

From our view above, I was immediately drawn in by the beauty of the river. The resort was developed as an Edificio of the local community. They run and operate the entire resort. The swift-flowing stream has been adapted to form a series of swimming holes, cleared of bigger rocks and separated by rows of boulders, where guests can enjoy hours of swimming and playing in the warm water. 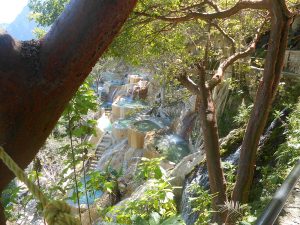 Cascading Pools for soaking in

First we wanted to soak in the cliff-side infinity pools at the Paradise area of the resort, about a mile back up the canyon. We took the morning bus shuttle to get there (it runs regularly, depending on demand). They have roughly 30 separate pools and we found a quiet spot, all to ourselves.

After a couple of hours soaking we were getting hungry. The resort has its own restaurants and taco shacks throughout, making it easy to find something to eat.

We decided to hike through the forest trails back to camp. The desert environment above turns to semi-tropical here in the canyon and we enjoyed the shade of towering amate trees and tropical plants, mixed with yucca, mesquite and various cacti.

That evening we went for a swim in the river. Day and night it keeps the warmth and the turquoise color. I sat in the water with my back up against the boulders and allowed the flowing water to massage me. 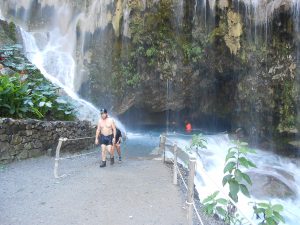 The Grotto (or Las Grutas)

Our next day I didn’t think it could get much better, yet all of this paled in comparison to my experience of the grotto. It was another short hike and more stair-climbing to get there. Along the way we passed by the river in its natural state, as it rushes down it’s rocky banks to feed the stream below. At the top of the stairs we came to the grotto. A waterfall cascades over the face of the cliff and covers the entrance to the wet cave.

Before going in, there was one more experience I had to try, the Vapor Tunnel. It was another short stairway up from the grotto, with its own entrance. To enter you have to make your way through a cold waterfall pounding down so hard you have to push your way through. Suddenly you emerge to the warm water of the dark cave. I don’t think I would have kept going, but my friend went there the previous day and she said it was worth it.

The light didn’t penetrate inside the tunnel and water poured from all directions. Just wide enough for one person at a time, I couldn’t see where the tunnel led. Then a light came on ahead of me. Someone had turned on a cell phone light (they sold waterproof covers at the stalls outside).

The light was a big help. I could see a small, rounded out pool a little further on with a few people soaking in it, but the person with the light was going past that, into a tunnel to the left, and the light disappeared with them. It was enough illumination to keep me going and I followed along the walls to the pool and stepped down in. Water continuously poured over my face and body. I didn’t stay long. There were heavy ropes attached to the side walls and I pulled myself back up and out, emerging as if from the birth canal. I felt like I was initiated. Now I was ready for the grotto. 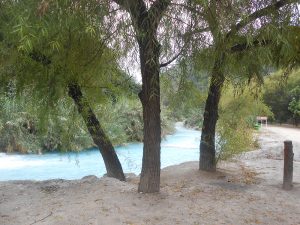 Campground Area by the River

To enter the grotto you again pass through the cooler waterfall flowing down from the cliff, this one not so intense. After the cold shower you wade into warm, mid-calf deep water as the cavern opens to a large dome-shaped room. In the center, a powerful warm-water-fall pours from a hole in the ceiling of at least a foot in diameter. There are smaller waterfalls around the cavern sides.

The cave was popular. There were people swimming, wading and taking photos. It seemed the choice experience was to make your way into the center waterfall or find one on a side wall with the pressure you like and stand under it as it massages your back and shoulders. I did a little of both. I was able to get near the big waterfall, but the pressure was so strong it was hard to get close or to stay in the same space for long.

Our last day we had to catch the 11:00 am bus. I went for a morning walk, ate breakfast and packed up. Luckily, for a minimal fee, we were able to get a motocab ride to carry our bags back up the hill.

This 2,000 acre resort is spread out with two separate areas, Las Grutas and El Pairiso. There are 4 hotels, various restaurants, gift stores and camping. They will even rent you a tent and set it up for you.

The low entrance fees of $140 pesos per person per day (about $8 USD) includes access to the river, soaking pools, grutas, tunnels, swimming pools and zip line.

This is a remote area, you can’t just go into town, come prepared.
It’s important to note that there are no ATM’s in the area, so come with enough cash for your time there (in Mexican Pesos). You can bring your own food or dine at one of the onsite restaurants. There are small stores and gift shops, but they do not carry groceries. There is also no WiFi or Internet.

You need to be physically fit
The resort is built on the steep walls of the ravine. You will be walking up and down a lot of stairs throughout your visit.

If you come mid-week (when there are less crowds)
Lockers in the lower, riverside area will be closed mid-week. The only available lockers are in the hotel at the top of the stairs. The lockers are only open until 6:00 pm and you need to collect your stuff by then (even if you end up using the lockers again the next day). It’s better not to bring a lot of valuables.

Restaurants take turns being open mid-week. Ask for their schedule. All restaurants in the resort have basically the same menu and food available, so it doesn’t really matter where you eat.

Getting to the Grutas de Tolantongo

From Mexico City: 3 hr to Ixmiquilpan + 1 hr to the Grutas (by bus)

Take a bus from Mexico City Central del Norte directly to the city of Ixmiquilpan, Hidalgo.
On arriving at Ixmiquilpan, you need to take a combi bus or taxi to the municipal market Ixmiquilpan, “Mercado Morelos”.
From there you must locate the “San Antonio” parking lot where the base of direct microbuses to Grutas Tolantongo is located. Buses to the Grutas are only 4 times a day during the week, hourly on the weekend.
Monday to Thursday:
11:00 13:30 15:30 18:00
Friday to Sunday:
From 10:00 am to 6:00 pm Departures every hour approx.

For transportation at the Grutas de Tolantongo resort you can walk or take the local bus that operates within the resort. It can take you from one area of the resort to the other, a distance of approx. 1 mile. You will still need to walk around most of the resort. There are some motobike transports for helping to haul luggage from the campground to the hotel at the top of the hill.

Get additional info at their website: Grutas de Tolantongo

La Gloria Tolantongo
In the same area, but a bit more rustic, La Gloria Tolantongo is a similar resort. You can get there via a bridge that connects the two parks. They have a separate administration and fees. Check their website for details: www.lagloriatolantongo.com.mx