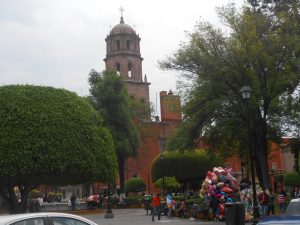 Most of the bigger cities in Mexico seem a lot alike. Having lived in Mexico part time for ten years, I’ve been to enough of them to not get too excited by another city. They are all pretty much the same, you’ll find streets lined by small shops and buildings in disrepair. The paint is peeling. They are mostly concrete structures with little decoration. Adding to the gray of the concrete, they all seem to have a coat of car exhaust and dust.

So when my English friends invited me on a weekend trip to Queretaro, my expectations were low. I was hoping our side trips from town would make up for our time in the city. Queretaro’s central historic district was a pleasant surprise. Though it sits in the center of a big city with a population of more than 800,000 people, this little pocket in the center of town feels more like a journey to the past. Comprising a 50 block area, the historic district is a UNESCO World Heritage Site. The colonial atmosphere here will take you back in time to Mexico’s revolutionary days.

In the early days of Spanish colonization it was a complex of monasteries, churches, convents and cathedrals. Today many of these buildings have been converted to museums, restaurants and hotels. The stone buildings have been preserved with arches, inner courtyards, and fountains, preserving the feel of times past. 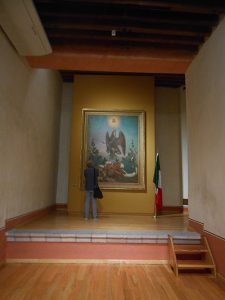 The state of Queretaro was the birthplace of the Mexican Revolution and the city of Queretaro played a major role in the country’s efforts towards independence. Though I was a little familiar with it’s history, before taking this trip I hadn’t thought much about the revolution or what independence from Spain was like for the Mexican people. Being here and walking the streets of Queretaro’s historic district, exploring the buildings and reading about the history brought the past to life.

Our first stop was a visit to the Museo de la Ciudad (Museum of the City), near where Hernan Cortes and Moctezuma II met for the first time. In the 18th century this building was the Royal Convent of Santa Clara, home for the sisters of the Capuchin order. Over the years it had a number of different uses; in 1867 it was used as a prison to hold the last emperor of Spanish rule in Mexico, Maximilian I, and his two leading generals. Today, along with displays from the Revolution, it is a cultural center and houses contemporary art.

The Centro Histórico is still filled with churches. If you like to visit churches, you could fill an entire day just by walking in this six by seven block area. On a quick scan of the map I counted at least twelve churches, convents and cathedrals, but then I looked at it again I found even more.

Our small group wasn’t quite that religious, but we were intrigued by the beauty of the buildings. We started with the Templo de Santa Clara (Temple of Saint Claire), directly across the street from my hotel. We also visited the Templo de Santo Domingo, half a block from where my friends were staying. They were grand and elaborate, with large altars and paintings of Christ. The churches date back to the 18th century and earlier. Many are still used for weddings, ceremonies and daily services. 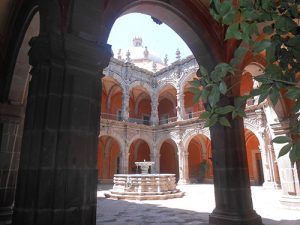 Most of the buildings in this part of the city were formerly either a church or part of a convent. They are rich in architectural design. Our favorite stop was the Art Museum, formerly the Monastery of St. Augustine. We meandered through the rooms viewing the artwork of Mexico, from modern art to 17th century Christian paintings. Some of the were large floor-to-ceiling paintings, so old they had to be kept in climate-controlled rooms. The cool temps were a nice break for us on a hot Mexican day.

Yet, the best of the artwork here was in the building itself. Built in the 18th century, this baroque monastery is considered one of the finest in the world. Carved into the rose-colored stone are iconic elements including gargoyles, saints and angels. From the courtyard you can see the white and blue tiles of the arched dome of Our Lady of Sorrows next door, matching the tiles in the courtyard’s center fountain. Everywhere you look is another view to take in. 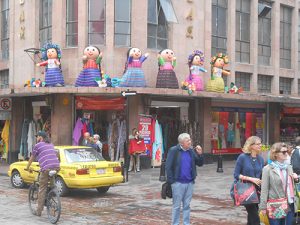 This part of town is easy to visit on foot. On weekends the main roads are closed to traffic and you will find the zocalo (central plaza) filled with typical food stalls and vendors. You’ll find indigenous women sitting on sidewalks and selling handmade rag dolls that the region is known for. There is also a small artisan market off of the zocalo, to the side of Templo de San Francisco.

Our second day there we decided to walk a bit further, out to the famous aqueduct. The aqueduct was built in the early days of the city, bringing water from springs in the hills in to town. It is made of 72 arches, each 20 meters wide and averaging 23 meters tall. The total length spans 1,280 meters, almost a mile long. We walked to the viewpoint at it’s end, where the water would come in to the city. From here it’s quite a sight, like learning to draw with perspective, the arches get increasingly smaller and smaller until it disappears past where they eye can see.

After the aqueduct we found a terraced restaurant and had lunch. By the time we finished and got back to the hotels it was already time to grab our bags and head to the bus station. What started out with slim expectations turned out to be a wonderful weekend getaway.

If you go to Queretaro …

Queretaro is two and a half hours northwest of Mexico City. Stay in the Historic Center where you will find colonial buildings converted into hotels and a wide choice restaurants in all price ranges. Add to your visit the Museum of Calendars, with it’s ancient Aztec and Mayan Calendars; Cerro de las Campanas, where Maximilian was executed; walk the river pathway along Rio Queretaro; see the famous houses of the city, one where a man made a pact with the devil, another where a young couple was murdered. 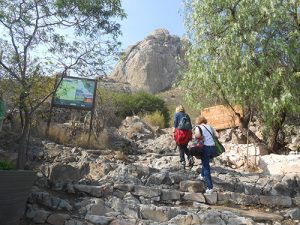 El Cerrito, also known as “El Pueblito” is a pyramid of the Chupícuaro culture who first inhabited the area. 30 minutes away.